What are you looking for?

Who We Are Menu

Identity Theft Awareness Week events focus on how to reduce your risk
By Seena Gressin
As unique as we each are, we all look the same to identity thieves: like good targets. To them, it’s all about our Social Security numbers, birth dates, account login credentials, and other personal information. But during Identity Theft Awareness Week (January 30-February 3) we can all fight back against identity theft.
Read more >
MCECU 2023 Credit Union Annual Meeting
DATE:    Wednesday, February 1, 2023
TIME:    1:00 P.M.
PLACE: MCECU Administration Building
2686 Mt Moriah Terrace Memphis, TN 38115
Your credit union membership gives you the privilege of participating in the Annual Board of Directors Election. Wanda Corcoran, Chairman of the Board, appointed a nominating committee consisting of Whitten Ortega, Jerry Broxterman and Mike Haggard.
Nominating Procedures: It is the responsibility of the Nominating Committee to nominate at least one member for each vacancy. Nominations can also be made by means of petition signed by at least 1% of our credit union members. Nominations must be accompanied by a certificate from the nominee stating she or he is agreeable to nomination and will serve if elected. Note: 1% of credit union membership is equal to 412. All candidates who wish to run for office and have their names placed on the ballot must be a member in good standing with the Credit Union and a current or former City of Memphis Employee.
DEADLINES: January 13th, 2023 for Nominations. Nominations must be filed at the credit union office – 2608 Avery Ave, Memphis, TN 38112 and marked Attention: Wanda Corcoran, Credit Union Chairman, by this date. Nominations will be posted in the credit union office by January 23, 2023.
Tips to ensure the security of your account:

No, that’s not the IRS texting about a tax refund or rebate. It’s a scam.

IRS impersonators have been around for a while. But as more people get to know their tricks, they’re switching it up. So instead of contacting you about a tax debt and making threats to get you to pay up, scammers may send you a text about a “tax rebate” or some other tax refund or benefit. Here’s what to know about the new twist.

Tried to Cancel a Service But Couldn’t? Learn steps to take.

Have you ever been unhappy with a service — like your phone or Internet — and tried to cancel it? But, when you tried, you found it difficult or nearly impossible? Learn about the ways companies illegally trick or trap people who use their services, steps to take, and your rights.

Scammers have been calling, pretending to be people from the FTC. While the names they use might be real, they’re actually scammers — some of them hoping to trick you into thinking they’re an FTC Commissioner. But they’re not. Whether the caller promises you a prize or threatens you with arrest — and even if they give a (fake) badge number — that’s a scammer.

So that call from someone who wants your money or info, and says they’re Commissioner Alvaro Bedoya from the FTC — or Commissioner Noah Phillips, Commissioner Rebecca Kelly Slaughter, Commissioner Christine Wilson, or FTC Chair Khan? That’s a scam. 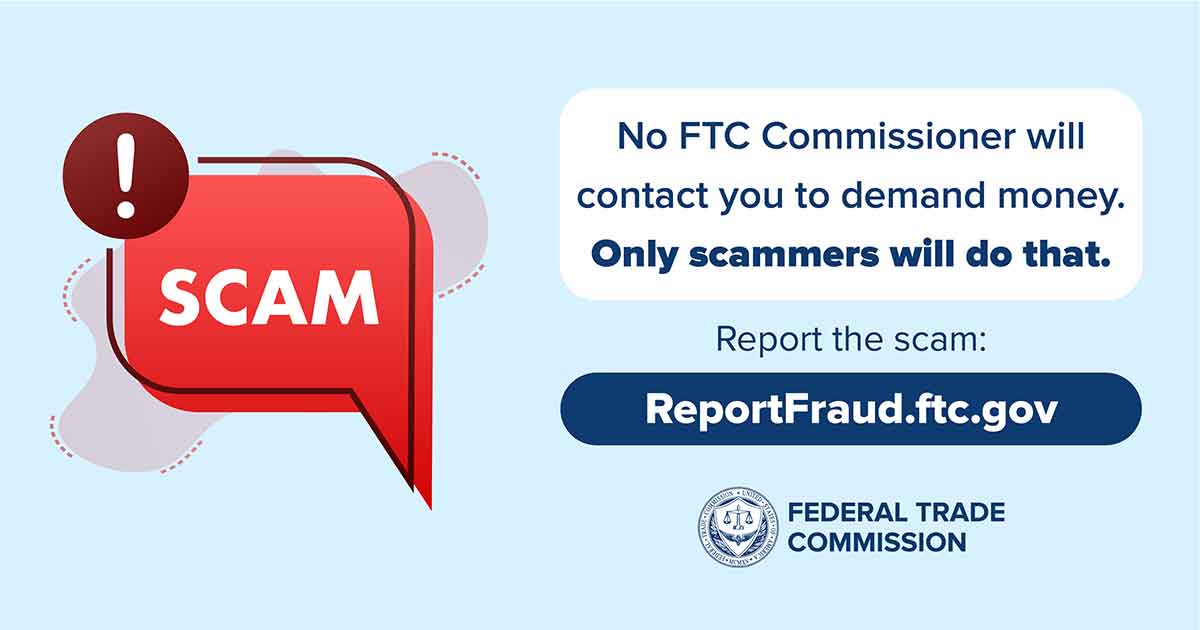 Scammers like these might demand access to your bank account. They might tell you to pay them by loading money on gift cards, buying crypto currency, or using a money transfer service like MoneyGram or Western Union. They could say it’s a way to avoid jail, pay a fine, settle an unpaid Amazon balance, or even collect a prize. But it’s a scam.

Here are three things to know about this scam:

Don’t respond to anyone who says they’re an FTC Commissioner or the FTC Chair — they’ll never call you to demand money, threaten you with arrest, or promise you a prize. Instead, report the scam to the FTC at ReportFraud.ftc.gov.

Automakers are producing fewer new cars right now due to a computer chip shortage, and many people are looking at used cars instead. If you’re shopping for a used car and feeling rushed to buy a car before you can fully check it out — stop! Some used cars may have flood damage.

After a hurricane or flood, storm-damaged cars are sometimes cleaned up and taken out of state for sale. You may not know a car is damaged until you look at it closely. Here are some steps to take when you shop:

Check for signs and smells of flood damage. Is there mud or sand under the seats or dashboard? Is there rust around the doors? Is the carpet loose, stained, or mismatched? Do you smell mold or decay — or an odor of strong cleaning products — in the car or trunk?

Check for a history of flood damage. The National Insurance Crime Bureau’s (NCIB) free database will show if a car was flood-damaged, stolen but not recovered, or otherwise declared as salvaged — but only if the car was insured when it was damaged.

Get a vehicle history report. Start at vehiclehistory.gov to get free information about a vehicle’s title, most recent odometer reading, and condition. For a fee, you can get other reports with additional information, like accident and repair history. The FTC doesn’t endorse any specific services. Learn more at ftc.gov/usedcars.

Get help from an independent mechanic. A mechanic can inspect the car for water damage that can slowly destroy mechanical and electrical systems and cause rust and corrosion.

Report fraud. If you suspect a dealer is knowingly selling a storm-damaged car or a salvaged vehicle as a good-condition used car, contact the NICB. Also tell the FTC at ReportFraud.ftc.gov and your state attorney general.

Scammers stay busy trying to take advantage of people. Some scammers pretend to be from the Social Security Administration (SSA) and try to get your Social Security number or your money.

Here's what to know:

Check out this video for more information on social security scams.

Our Online Chat Support connects you with the same excellent member service staff that you would speak with, if calling into our Member Service Center.

Try it! We are looking forward to chatting with you!

Note: In order for the Chat Bubble Feature to function properly, make sure you are using one of the following browsers: